Subscribe to our blog for occasional news and the scoop on special offers.
We respect your Privacy

Yurt curtains are up

Curtains are now hanging in all the yurts. Made from the softest handwoven Donegal woollen tweed (courtesy of the world-famous Magees of Donegal), together with the smouldering wood-burning stove, they add an extra layer of warmth and cosiness to your idyllic winter glamping getaway. :-) #WinterGetaway #WinterReady #RomanticGetaway #Escape #glamping
73 views0 comments

Farewell 2019, what a year you've been. We'd like to say thank you to all of our glamping guests for coming to stay last year and helping to make it, our very first year, such an amazing one. Wishing everyone a very Happy New Year!! #Glamping
46 views0 comments

December is here and we are digging out the fairy lights, putting up the holly (and looking for eco alternatives to tinsel!) and getting into festive spirit at the Lodge. In a fit of giddiness we've decided to offer December guests free mulled wine (along with the 10% Winter Discount!). See you around the fire! 🍷 #Christmas #WinterGetaway #Glamping #EcoLodge
33 views0 comments

Amidst whispers of a forthcoming Indian summer (we live in hope!) preparations are nevertheless underway for the cooler months of Autumn and Winter. Extra supplies of thick Donegal woollen blankets and hot water bottles have been ordered. Plenty of firewood is being chopped. The donkies have now come down from the hill and are in their winter residence again on the front meadow, meeting & greeting everyone who arrives. And we are particularly looking forward to cosying up
44 views0 comments

That summer feeling may be evaporating but there are ways to cling on to it just that little bit longer. We are currently offering a Midweek Discount of 10% off all midweek bookings so why not pack your bag and escape to one of Ireland's most epically scenic counties where a luxuriously furnished yurt on a remote lakeshore awaits. Even if it is raining outside, who cares when you are curled up in your yurt-with-a-view and its cosy wood-burning stove to banish the September ch
28 views0 comments

A huge congratulations to Aislynn & David on their recent engagement here!!💍 The first engagement at Lough Mardal Lodge. We're not sure who was more emotional, us or them. Suffice to say there were tears all round. Wishing them the very happiest of futures together. We hope to see them again, next time as Mr. & Mrs. ❤️ #RomanticGetaway #Glamping #RomanticDestination #Travel #WestofIreland #Donegal
49 views0 comments

The Lodge is now open

We've had some very cool and hardy glampers come stay in our yurt since February. So hardy our very first guests arrived in the snow. They assured us their wood-burning stove kept them warm and toasty as they looked out their windows onto a lakeside Narnia. Other guests experienced howling storms, nails were bitten before they relaxed and felt comfortably at rest that their yurt wasn't going to blow away, with them inside it. It actually made the whole experience for them th
86 views0 comments

We made the papers!

Thank you so much @Thombreathnachtravel for giving us such a great write-up in the '20 Cool Campsites in Ireland' travel piece in today's Independent.ie. Not that we usually need much of an excuse but it is definitely a cause to celebrate tonight! #Travel #Glamping #Holidays #Accommodation
56 views0 comments

As we work away finishing the Lodge communal building for this Summer the first of our yurts is ready and available to book now at a special reduced rate on Airbnb. We've even just had our first guests and received our first review, gulp! The yurt is very bright and spacious and comfortably furnished with a wood-burning stove to keep you cosy and warm. It has lake and forest views and a sun which (when it shines) very obligingly sets directly outside your window. :-) As the L
40 views0 comments

Our first yurt is going up this week hurrah! Over two weeks have been spent preparing the foundations and platform, much longer than expected. The foundation is made of recycled car tyres. The interior floor is being made with recycled wedding marquee floor boards - so dancing feet were the last to tread on them. A lot of head-scratching now over what to call each yurt... #Yurt #Glamping #SleepUnderTheStars #GlampingLife #LakesideGlamping
76 views0 comments

We are very lucky to have wild bilberries growing along the shoreline and they are now ripe for picking! The girls actually managed to save some for later on our first foraging expedition, which was a first! I should have got a photo of their black lips by the end of our mission. Next time... :-) In Ireland, the fruit is known as fraughan, from the Irish fraochán, and is traditionally gathered on the last Sunday in July, known as "Fraughan Sunday". They are known has hucklebe
102 views0 comments

Lime rendering the external walls is now complete. Coat after coat has been applied by hand, initially massaged into the straw and then layers added to create a uniform finished surface.The final coat has been applied after 6 weeks of hard work and about 20 tonnes of lime and sand! The building remains 'wrapped' - initially to protect the straw from the rain, but now to protect the lime from the sun - who would have thought! Thank you lime expert Stuart Ogier who has lead thi
70 views0 comments

Well, we're getting there. We've been building throughout a pretty harsh Winter and although at time of writing it is yet another cold morning, the sun is shining and the birds are in full song...one is cautiously optimistic that the sub-zero temperatures are behind us. Despite the erratic weather Spring has arrived for sure as we are tripping over frogs and the lakeshore ditches are full of frog spawn. Snowdrops are up, we have spotted Whooper swans, Canada geese and Mallard
186 views0 comments

A south westerly wind today according to the weather vane. And not a snow blizzard in sight! #Glamping #LuxuryCamping #Yurt #Donegal #Ireland
40 views0 comments

We were half expecting to escape the #beastfromtheeast up in our corner of the North West...and then in the blink of an eye this happened. #partofthegang #BeautifulDestinations #BeautifulLandscape #Familyfriendly #WildAtlanticWay #Donegal #Glamping #Ireland
35 views0 comments 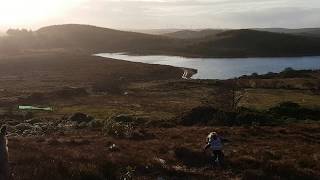 Big news, the sun came out today. So it was the first decent walk for days that didn't feel like an endurance test. Although usually always drawn to the lakeshore today we went up the hill. The view on a good day with Donegal Bay in the distance always catches your breath. (The sound of angle-grinders on the building site ruining the peace but playful toddlers and meditative zen dog compensate.) More of these days please. #Glamping #Travel #EcoLodge #BeautifulDestinations #
26 views0 comments

Yurts ordered - now where to position them!

Yurt's ordered and on their way. 🤗🤸 Now to decide where to position them...and where to place the windows and doors. After years of dreaming, musing and planning we're getting down to nitty gritty (giddy) details now! #Yurt #lake #idyllic #glamping #travel #beautifuldestination
57 views0 comments
bottom of page